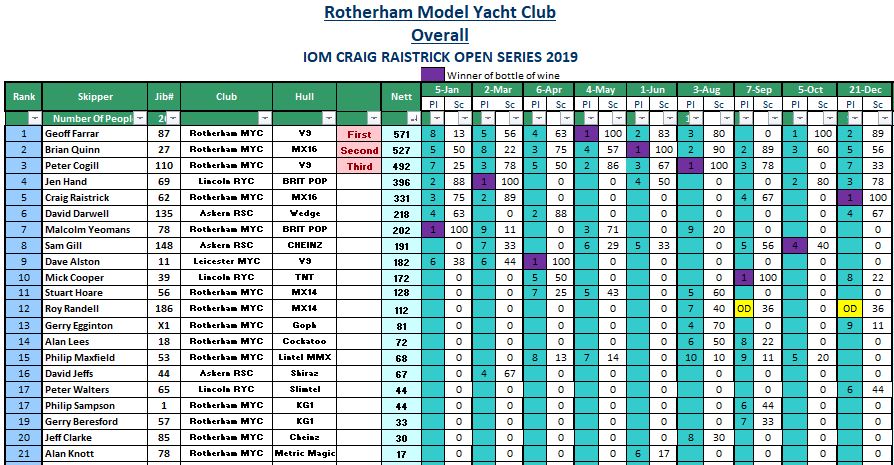 Geoff Farrar wins the 2019 Craig Raistrick Open IOM Series Trophy from Brian Quinn, Peter Cogill and Jen Hand.
21 skippers with 6 visitors competed in 9 events over the year, with Brian won two events, and eight other skippers each won one event, but 9 skippers won a bottle of wine.
Thanks to Craig Raistrick for sponsoring the Trophy for the past three years.
In 2020 there will be a Winter and Summer Series each with 5 events - First Event Saturday 28th December


9 Skippers with 4 visitors sailed the final event in the Craig Raistrick Series.  After all the rain, the weather was fine and mild with a steady 11mph southerly wind.  The water level had risen enough to make launching easy, without the use of the temorary pontoon.
Generally the startline had a port end bias which proved intersting as boats tacked ont port trying to cross the starbaord tack boats.
Dave Darwell had borrowed a boat, but soon had it sailing quickly.  Race wins were shared between Craig, Jen and Geoff, with Mick Walters of Licoln, a newcomer to model yachting, winning the final race.
Overall Craig won from Geoff and Jen.

Malcolm Yeomas won the final round of the inaugural George Cliff DF65 OPen series.
A good morning's sailing on B suit with a steady WSW which increased a a rain shower came through whichprovided n excuse for a coffee break.
Gerry Eggington sailing and RG65 won a bootle of wine asthe other skippers had previosly won ione.

Overall Brian Quinn who was the only skipper to sail in every round comfortably won the Series and Trophy. 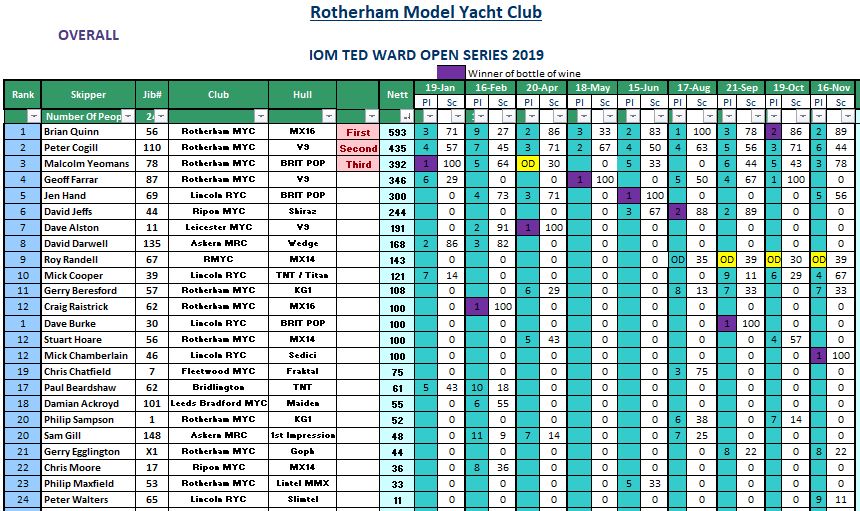 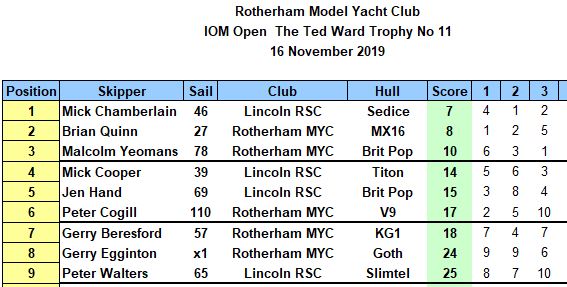 A good morning sailing in a light SW wind which hid a few shifts & bends.  Five different skippers won a race at the penultimate Ted Ward IOM seri,; after a few races, Stuart Hoare got back into the groove and won race 5.
Geof Farrar was the most constent  helm and won overall from Brian Quinn who won the bottle of wine.
Thanks to Roy Randell and John Grey as OOD and scorer.

Going into the Final Round of the Series in November, Brian Quinn has unassailable lead from Peter Cogill and Geoff Farrar.

Nine sailors with visitors from Askern and Lincoln came to sail in the ninth “Craig Raistrick” series regatta.   We welcomed back Mick Cooper (Lincoln RSC) and Craig Raistrick.
The steady northerly wind greeted the fleet and was ideal for a figure of 8 Course; with a few bends / shifts in the wind to test the skippers’ upwind skills and to give opportunities  for gaining places.

The skippers were well behaved and made good clean starts on a starboard biased start line.

In the first race Craig Raistrick (MX16), Brian Quinn (MX16) and Peter Cogill (V9) broke away; Brian won from Peter and Craig.  In the second race Craig who was brushing off the cobwebs, won from Mick Cooper (TNT) and Sam Gill (Askern RSC - Cock a Too).

During the week the strong winds had blown a large patch of floating weed onto the course, but the Wednesday team cleared it near the jetty and round the marks. However during the races some of us found bits of floating weed and needed to make pit-stops on the jetty to clear it.

A good morning of clean, competitive yet friendly racing which kept us all on our toes watching the wind for small changes in strength and direction.

Thanks to Roy Randell for the OD for the day and all the competitors for taking part in a very friendly and competitive mornings racing.

Mick Cooper won the bottle of wine and won overall from Brian and Peter.

In the Craig Raistrick Series after 7 Regattas, with one discard, Brian is now leading by two points from Peter followed Geoff Farrar.

The water has dropped and some weed is still growing; this week’s working party will be checking and clearing any new patches in the sailing area.

Eight sailors including three visitors from Askern and Fleetwood came to sail in the eighth “Ted Ward” series regatta
The weather forecast was for brisk winds gusting to 20mph but dry.
The day was dry and we were able to all put on our top suits; the winds only reached high enough speeds to cause tacking or submarining issues as a front or two came through.
Wind was from the south and went round to the SSW course set with a long windward beat to the first mark and then two reaches and a run ,two laps to complete.
The first two races were won by Brian Quinn with Geoff Farrar and Chris Chatfield from Fleetwood fighting for second and third.
The third fourth and fifth races Brian went off the boil and Geoff Farrar Managed to get three wins in with David Jeffs from Askern and Peter Cogill fighting for second and third.
Both Philip and Peter lost good positions after being taken out by wayward boats.
Races 6/7/8 Brian came back with a first and two second’s David Jeffs, Chris Chatfield and Peter Cogill fought it out for second third and fourth places but Philip Sampson who does not compete much was showing some good sailing with a third and a fourth place in race 7 and 8 well done. Geoff Farrar was unlucky to sit out these races due to gear failure.
Races 10/11/12/ Brian came back with a flourish with three wins with Geoff Farrar, Peter Cogill, David Jeffs and Philip Sampson sharing second, third and fourth places.
David Jeffs won the bottle of wine, and Brian David and Chris won engraved whisky tumblers.

Following the weed cut three weeks ago, the remaining cut floating weed has nearly cleared, but in most races only one boat caught a little weed.

Thanks to Roy Randell for stepping in to do the OD for the day and all the competitors for taking part in a very friendly and competitive mornings racing.

​Overall, with one discard, Brian is leading the Ted Ward Series followed by Peter and Jen Hand.

A cool sunny day with a steady northerly wind which shifted as the clouds scudded across.
All but Peter started on B suit; he retired from the first race to change down.  An enjoyable morning of close racing.  Geoff made more good starts and most consistent.  The wind dropped for a few races, but everyone stayed on B suit, and the wind increased later.
Stuart enjoyed his first windy day sailing an IOM and suffered a few nose dives.
​A good days racing won by Geoff Farrar who also won the bottle of wine.

In the Series after 4 events,  Peter Cogill has 7 point lead from Geoff Farrar followed by Brian Quinn.

,A lovely sunny and warm day at Harthill for the April round of the Ted Ward IOM regatta, but the wind was generally less than the 3 to 6 mph forecast.
The wind was patchy all morning;  Jen Hand, Brian Quinn and Peter Cogill all had good results but Dave Alston was the the most consistent.
San Gill was sailing the new Dave Thomas' design and 3D printed  Fist Impression IOM and got faster during the morning as he tuned it.
Dave Alston won the regatta and the bottle of wine.

IOM Open Ted Ward Trophy Series event no2
16th. February 2019.
Six clubs were represented in the second of the Ted Ward Trophy Series, and eight types of IOM boat were ready to sail.
The eleven competitors all put on their top suits in a freshening south westerly breeze and a triangular course was set with two laps to complete each race.
The first three races were hard fought between Craig Raistrick, Dave Darwell and Jenny Hand, then David Alston decided he wanted some of the action in the third and fourth races.
The wind decided to freshen even more and competitors were wondering do I change down or not but no all stayed on top but Damian Ackroyd who tried the working rig and did better in four races. Malcolm Yeoman’s also did well in races 7/8/9/10.
By the 7th race three competitors had dropped out due to boat problems but we were treated to some close racing throughout the twelve races with some good banter going on and overall rule observance was good.
My thanks to the backroom boys for the help.
Come and join us for the next open event on Saturday the 2nd of March.

What a great start to a new open series, the weather eventually was kind to us after the early snow showers which turned to slush.
Forecast was cloudy with 6/8 mph wind easterly which gave us a few problems setting a start line however, our sailing o/d with the help of others were able to set a reasonable course and start line.
All boats were on top rigs with visitors from Lincoln, Bridlington, Askern and the home club Rotherham. Racing proved to be competitive all the way through the eleven races.
Geoff Farrar started well, but had boat problems after two 1st places, but it was Malcolm Yeoman’s who came to the fore showing us the way round. Dave Darwell myself and Peter Cogill where left to fight it out for 2nd 3rd 4th places.
Congratulations to Malcolm who won a bottle of wine, for his consistent performance, second and third were close between Dave Darwell and myself with only 2 points in it.
The self-observing went well with all competitors doing there turns when needed. A very enjoyable days racing with plenty of good banter by everyone. This is what sailing is all about long may it continue.
Brian Quinn Racing Officer Rotherham.
​

A very cold winter’s morning for this event which must have put a few off coming, however we had five brave souls four of which were from Rotherham and Dave Darwell turned up representing Askern.
Weather was cloudy with a stiff breeze which meant we all started on number one suit.
We ended up having eight races which saw Dave Darwell showing us how to sail a dragon by dominating the front position, but Brian Quinn kept in touch and managed to pinch three 1st places from him.
But again some good sailing was had by everyone on the day, with the self-observing working well again.
Come and join us in February all dates are on Rotherham’s website.
Brian Quinn  Racing Officer.

Malcolm Yeomans wins the first round and the bottle of wine of the 2019 Craig Raistrick Open series which this year is monthly.
A competitive days racing in light westerly wind.  Craig Raistrick was the most consistent skipper but he  missed the last four races,  Jenny Hand sailed well. 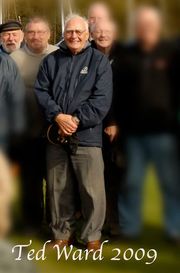 We are to sorry to announce the death ​of Ted Ward, a long standing member of Rotherham Model Yacht Club.Ted joined Rotherham MYC after retiring and moving to Derbyshire, he was a school teacher with many skills and activities : radio controlled flying and sailing.
Ted sailed both Marbleheads and IOMs,  taking part in regattas and social sailing.

Ted was always approachable and contributed to the club in many ways.
When Ted had to stop sailing due to ill health he generously donated his boats and equipment to the club to be sold.
The proceeds will be used for a memorial Ted Ward Series for IOMs which will be the inaugurated in 2019.
​