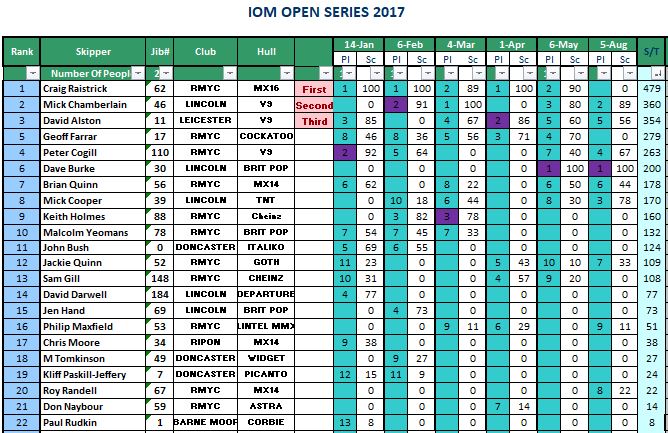 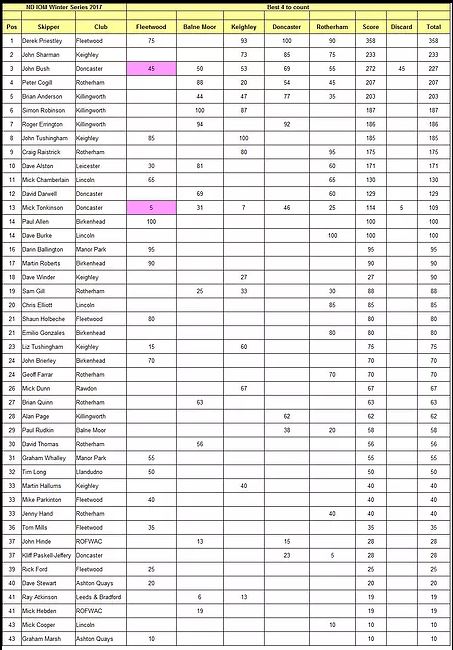 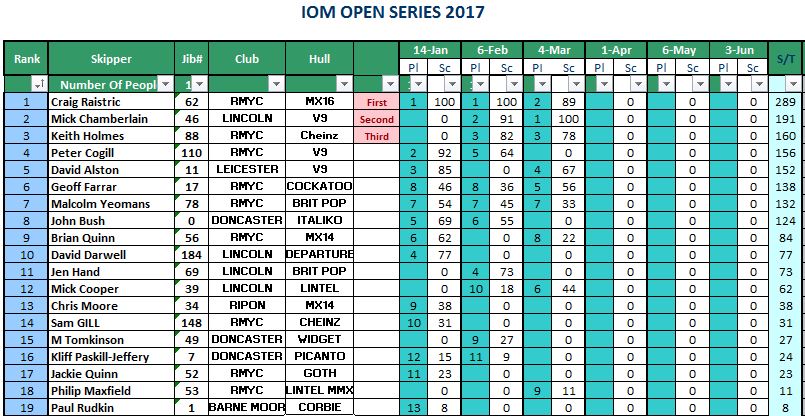 ​IOM Northern District Winter Series at Rotherham Model Yacht Club Sunday 19 February 2017 by Peter Cogill
​
Twenty IOMs with sixteen visitors from both sides of the Pennines and from the Northern & Midland Districts entered the Rotherham leg of the Northern District Winter Series at Harthill Reservoir on Sunday.
The wind was a light onshore westerly which gave the David Thomas, the OOD challenges for setting the start and everybody on the windward leg and mark, with the bends and shifts producing some interesting sailing.
The first two races were sailed without any incidents and the first few boats round the windward mark - John Sharman (Arrival, Keighley), Dave Burke sailing his new Brit Pop (Lincoln) , Chris Elliott (Brit Pop, Lincoln), Derek Priestley (Intransition, Fleetwood), Peter Cogill (V9, Rotherham) and Jenny Hand (Brit Pop, Lincoln) fighting for position.  John Sharman won the first race from Dave Burke and Dave won the second from Chris Elliott.
In the third race we had a new start line and windward mark which was further from the bank; the wind shifts near the mark combined with the extra distance challenged the observers and  many sailors’ eye site producing a number of incidents at the mark, and some of the leading boats lost many places while the later arrivals gained.  Mick Chamberlain (V9, Lincoln) won from Dave Burke.
An intermediate windward mark was set for the rest of the day and by the fourth race Craig Raistrick (MX16, Rotherham) was finding his form and finished third behind Dave Burke and Derek Priestley.
Racing throughout the fleet was close and any mistakes proved costly.  As usual those that made good starts and rounded the first mark without incident got good results.
In race 5 Geoff Farrar (V9, Rotherham) had a good race, finishing third behind Dave Burke and Chris Elliott; Mick Chamberlain had winch problems which put him out until after lunch.
In race 7 Craig Raistrick won from Chris Elliott and Derek Priestley, with Emilio Gonzalez (Brit Pop, Birkenhead), fourth. In race 8 Derek Priestley won from Dave Burke and Chris Elliott with John Bush (Rage, Doncaster) fourth.
Following the break for Rotherham’s well-known pie& peas and apple crumble, the sailors returned to the fray in a slightly lighter breeze.  In race 9 Dave Burke’s, the in-form sailor, boat became entangled before the start, and he was always playing catch-up; Chris Elliott won from Emilio Gonzalez and Craig Raistrick.
Craig won the race 10 from Dave and Emilio, with Mick Chamberlain in fourth. Dave again won Race 11 from Geoff Farrar and Craig with Dave Darwell (Departure, Doncaster) fourth. Race 12 had Dave first again from Derek and Dave Darwell.
Race 13 saw a change on the final legs with Craig winning from Mick Chamberlain and Dave Alston (V9, Leicester).  Derek Priestley won race 14 from Dave Burke and John Sharman. In the next race Sam Gill (Cheinz, Rotherham) got a flier and lead the fleet for most of the race, and finished third behind Dave Burke and Craig Raistrick. Craig won the penultimate race from Dave and Emilio. Dave Burke won the final (17th) race from Emilio and Derek.
Dave Burke won the event (20 points), from Craig Raistrick (49) only 1 point ahead of Derek Priestley.
Racing was always close and the fleet was rarely spread-out with everyone enjoying the day; most sailors took their penalties but some were not as law-abiding as others, as was noted by Derek Priestley (MYA President) at the prize-giving.
Thanks to OOD David Thomas and his observers and Jacky Quinn and team in the Galley.
RMYC Open Series No 2 6th February 2017

IOM Open series Second Race.
4th February 2017 Hosted by Rotherham
Sponsored by Craig Raistrick
What a great day’s close and competitive sailing and a big thank you to those from other clubs who made the effort to come to a good event. As well as six of our own for turning out on a pretty chilly morning.
The wind was fairly brisk first thing then the sun came out to warm things up a bit and the wind moderated to give us an ideal day.
Our O/D David Thomas set a good course which kept things lively throughout the morning and the racing quite close.
Craig seems to have got the bit between his teeth and is taking some beating but Mick from Lincoln pushed him hard. Keith Holmes came a close third, then it was Jenny Hand ,Peter Cogill  and John Bush fighting it out for forth fifth and six.
Overall I think it’s fair to say that a good day was had by all in their own way.
Can’t wait for the next round which is on Saturday 4th March, let’s make it the best.
Brian Quinn.

13 boats sailed in the inaugeral  of the monthly races in the IOM Open Series in light NW breeze under clear skies with temperatures much more pleasant than those forecast earlier in the week.
Craig Raistrick (Rotherham) sailing an MX16 won 13 of the 16 races, after discards only one place separated Peter Cogill (Rotherham) from David Alston (Leicester) both sailing V9s.
The next Regatta in the Series is Saturday 6th February.
A prize is awarded for each Regatta with overall Series Prizes
Northern Disrict IOM Winter Series

IOM Northern Summer Series 25th September 2016
What a great day, firstly the weather turned out better than we thought it would and secoundly we had a great selection of competitors from various clubs in the north. Although it was noticeable there was no one from representing the east side of the Pennines.
There were thirteen boats and the wind was SSW turning more westerly during the day strength 12 to 15 mph and all decided to chance putting on their top suits even though they would be pushed at times.
The new boy on the block Craig Raistrick continues to show us all how to do it but he was pushed at times by two of our visitors from Market Bosworth Steven Hayward and Lawrie Brow. Neil Thornton from Scarborough was managing to hang in there ready to pounce when he could.
Our O/D David Thomas set a long two lap course and keep things moving along at quite a pace and laid down the law on the standard rules of racing whenever it was needed although I hasten to add this was not very often.
We managed to complete eight races before we were called for lunch at 12.00 pm by our catering team who had prepared a Pie/Peas meal with Crumble and custard for afters which went down well with our competitors. We missed the only shower of the day whilst sat down.
Suitable fortified the second eight races started in freshening winds which prompted one of us to change to working rig but the rest were determined to stay on top suit. Craig continued to dominate, but being pushed by Steven and Lawrie and the afternoon continued with all competitors pushing hard behind the top four or five until a further eight races were completed. The last race started at 3.00 pm and the day finished at 3.30 pm.
We must thank the O/D and all the back room boys who observed, produced the results and manned the rescue boat, not forgetting our girls and boys who produced that excellent meal.
I think a good day was had by all.
Brian Quinn “Rotherham Model Yacht Club”. 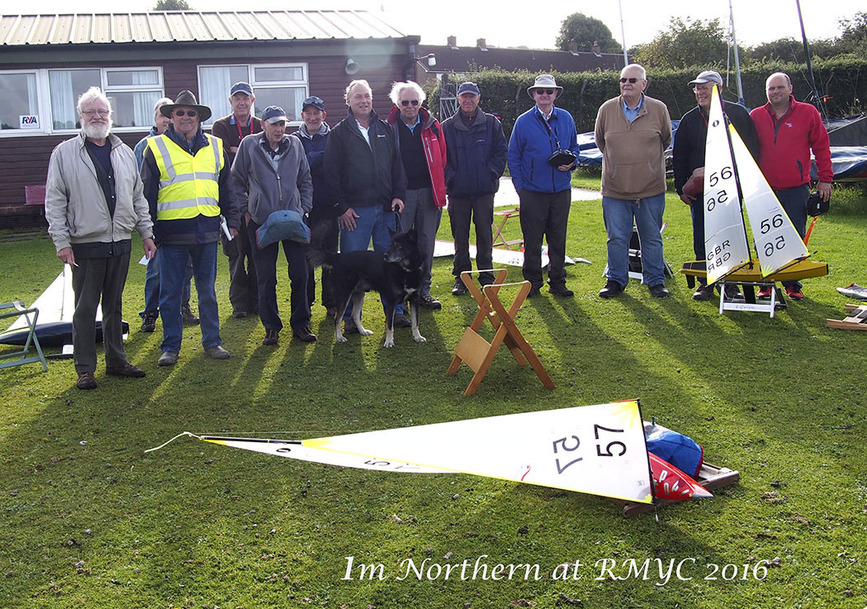 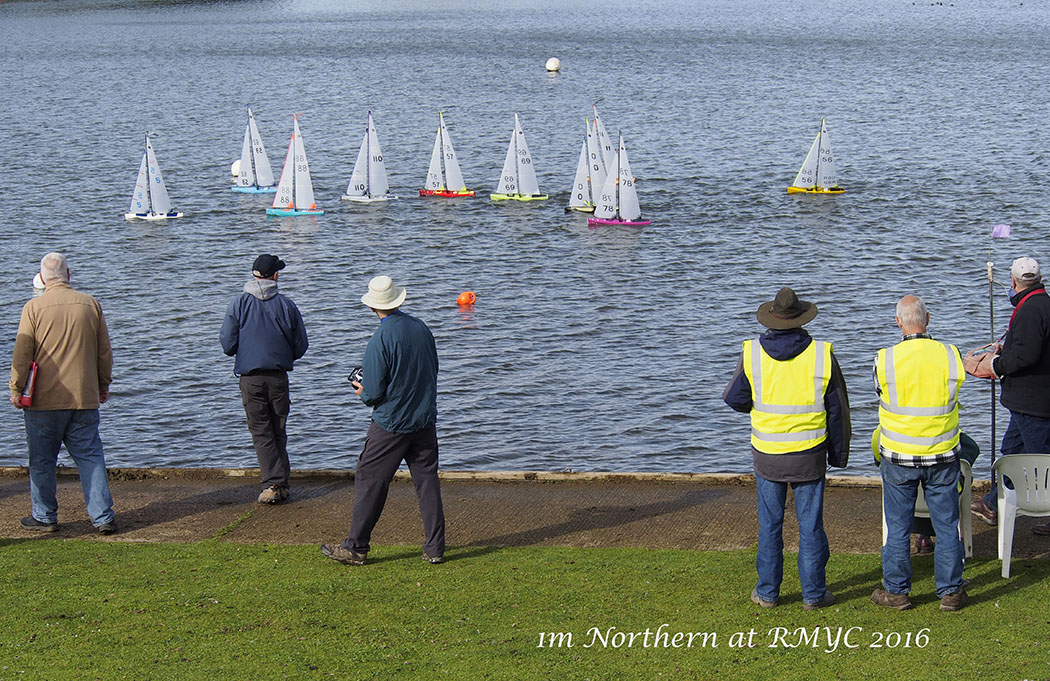 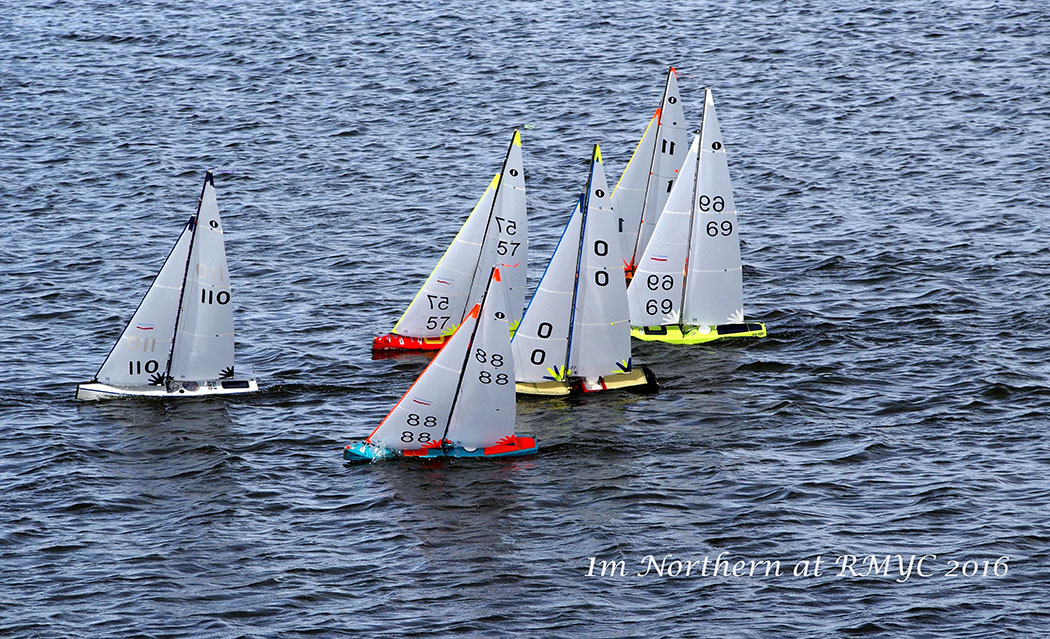 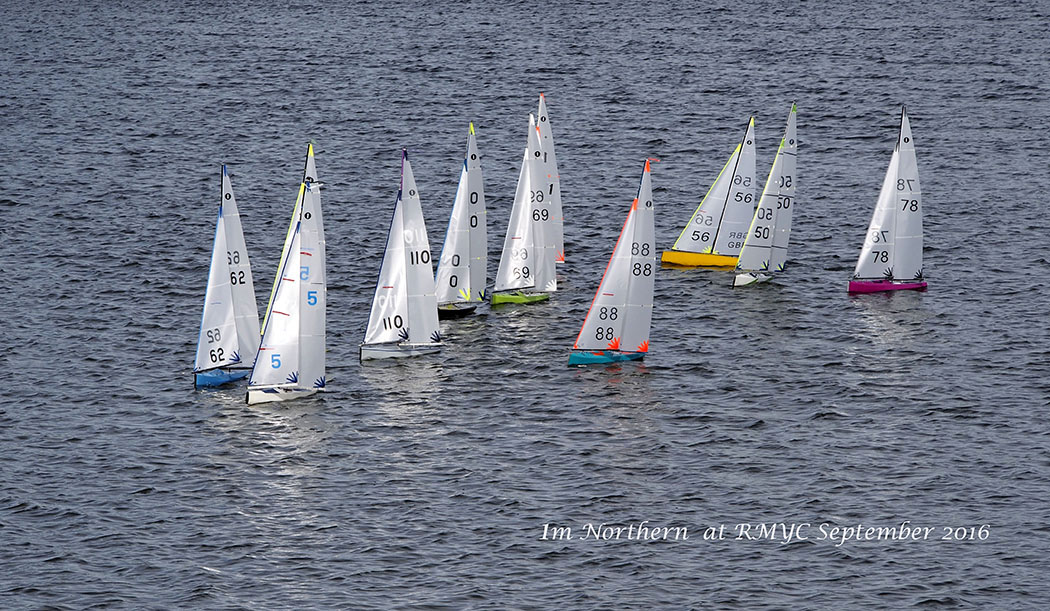 We had a good turnout of 17 boats of various top designs sailed by skippers from all over the Northern District.
The weather forecast was giving us some brisk SSW winds up to lunch time and increasing for the afternoon with the possibility of the odd shower and most competitors were going for second suits.
The briefing was at 9.45 am and David Thomas the O/D for the day explained the instructions and course giving us a long beat up to the windward mark leaving it to starboard with a reach to the second mark and then a long run to a gate at the bottom, after 2 laps the finish was in the middle of the course.
The first three races saw John Tushingham (Keighley) showing every one the way around, with Chris Elliot (Lincoln) a close second, however the fourth race saw Chris in trouble with a breakage and a newcomer to the scene from Rotherham Craig Rastrick sailing an MX 16 taking his place . Dave Burke (Birkenhead), Keith Holmes (Rotherham) and Damian Ackroyd (Leeds/Bradford) were all vying for 3/4/5 places.
Various boats had to be rescued in these first races with breakages but it soon settled down with most competitors able to continue after repairs. After 8 races approximately 12.15 pm we had a lunch break. The Rotherham ladies served up Steak pie/Mushy peas with rhubarb crumble and custard to follow and as much coffee/tea as they could drink to combat the cold wind we were getting. Not bad for £3.
Well fed, we re-commenced at 1.00 pm with the final five races being sailed in high gusty winds.
The top four maintained their dominance through the rest of the races with mixed results coming from the other competitors. The thirteenth race took place in a rain/hail storm which brought an end to the proceedings. It was decided to finish at this point.
As you can see: 1st John Tushingham ( Keithley )
2nd Craig Rastrick (Rotherham)
3rd Dave Burke (Birkenhead) 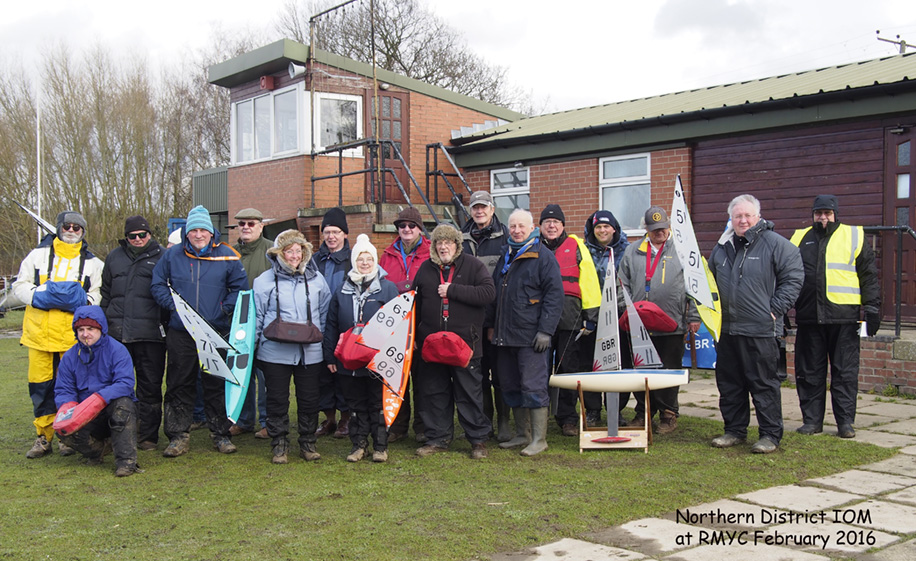 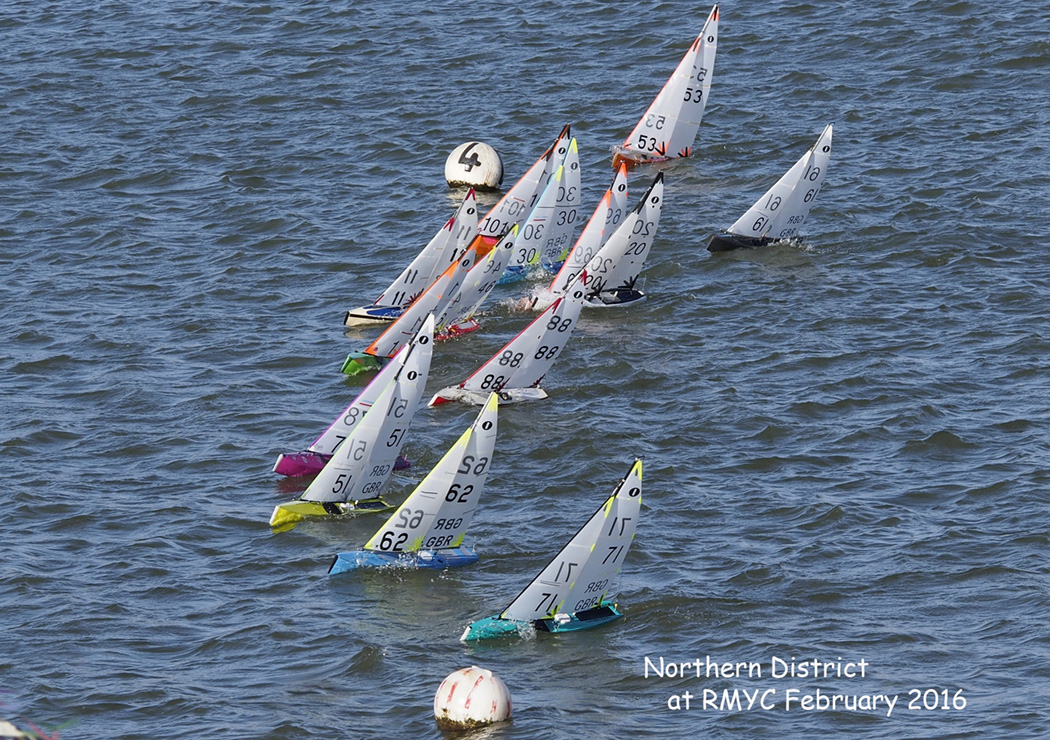 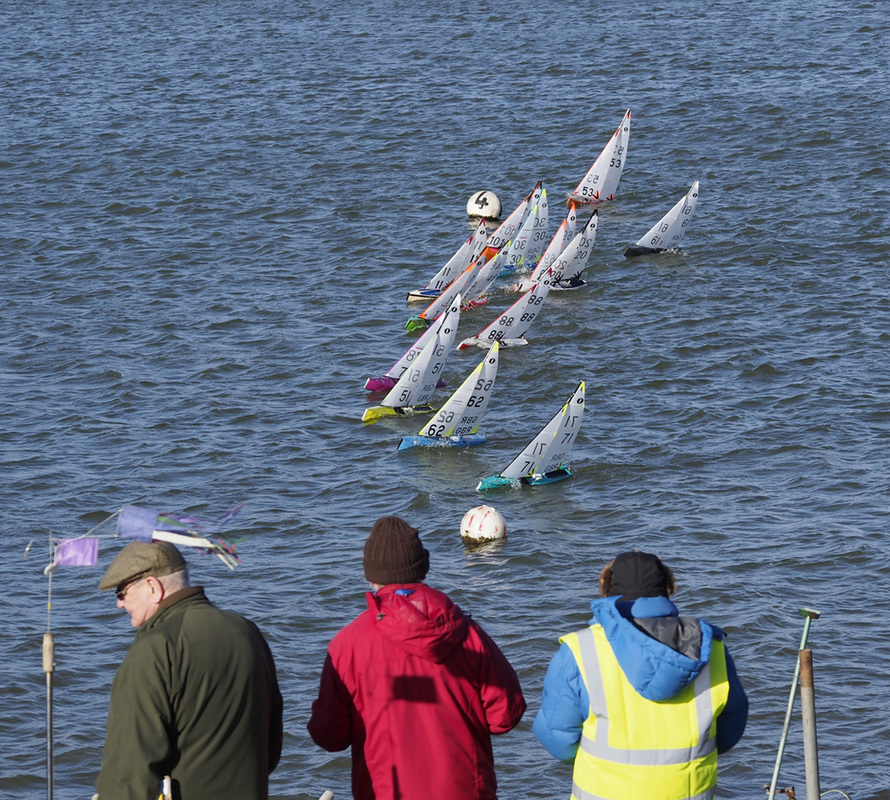 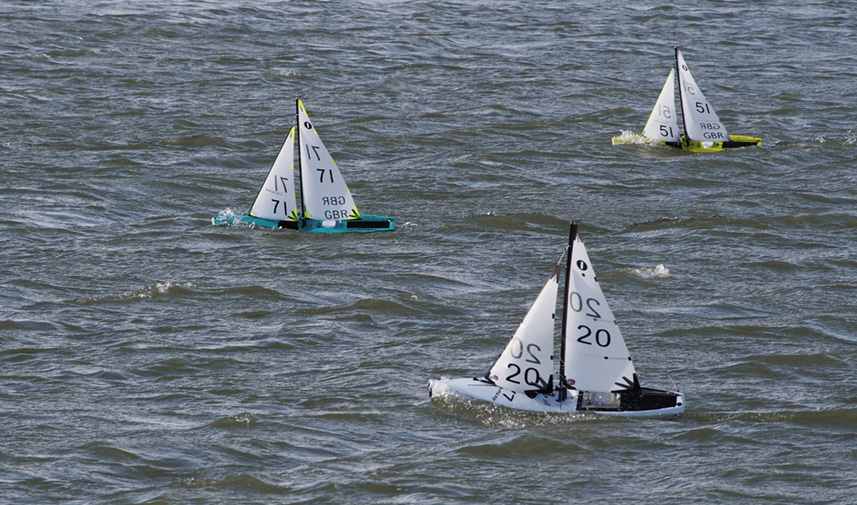 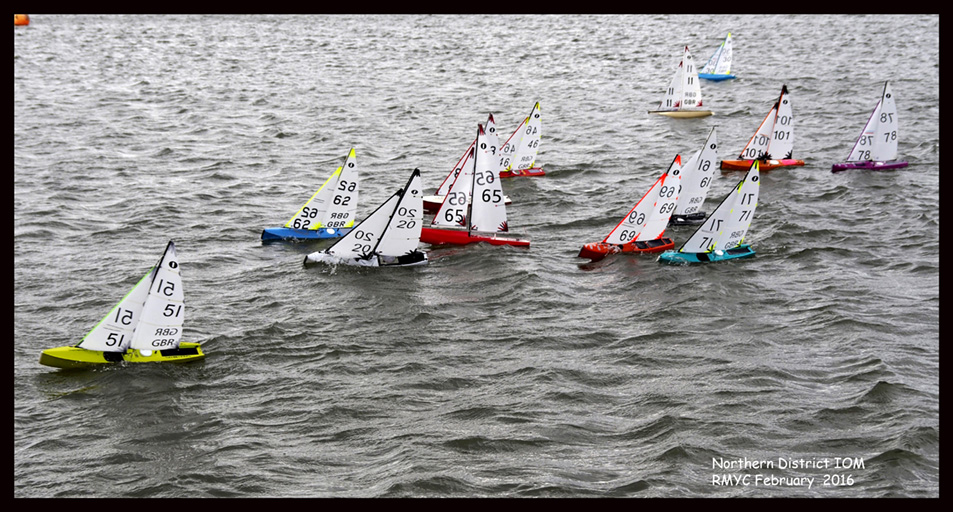 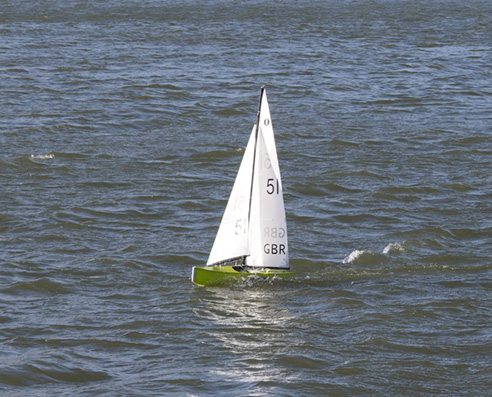 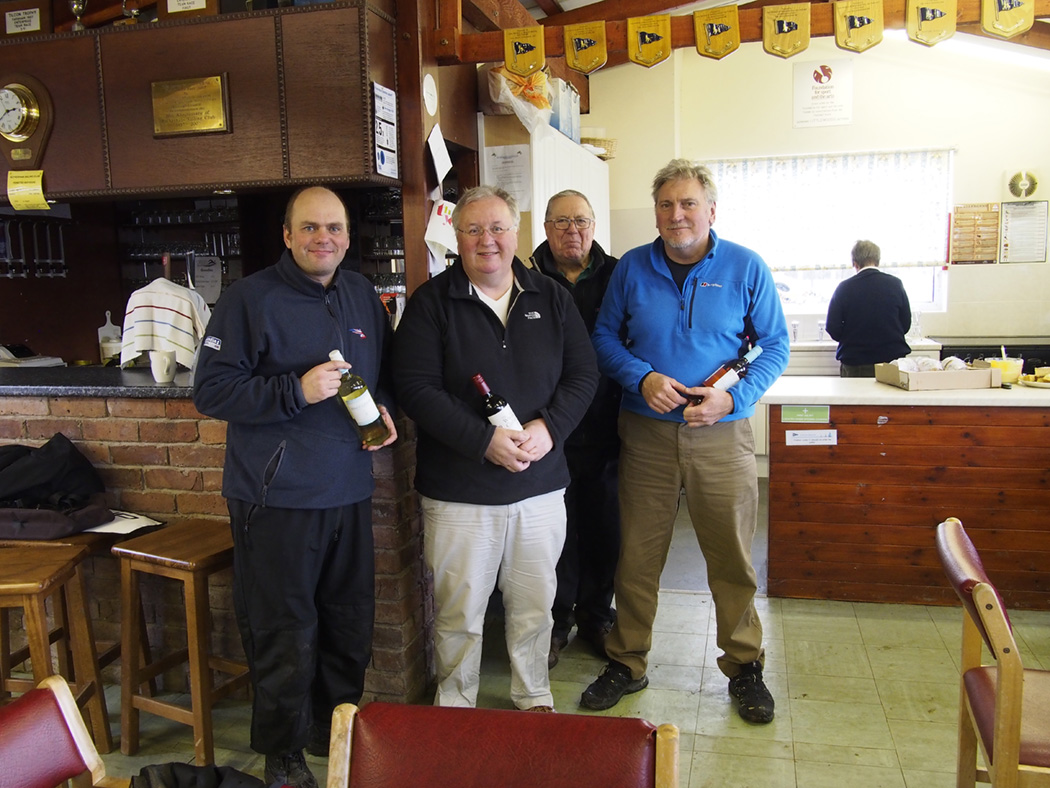