We were greeted by a mirror-like water but the wind filled in from the SE then S during the morning.  In Race 1, William won his first race since starting sailing again, followed by Simon and Rob. Martyn won the next 4 races and was generally the inform skipper, William was still sailing well with 3 seconds and a third before the coffee break. Over the morning the wind didn't shift but kept dropping in patches. Stuart was sailing well chasing Martyn and won the 9th race. Simon won 2 races and had a good morning. Brian won 2 races after coffee.
Martyn won the morning from Stuart who won the wine, and Simon

A forecast for a fine day with a 12mph NW wind. However the wind was more W which is onshore which always requires a compromise when setting the start line, so we had two short beats on a zig-zag course which lead to bunching at the windward marks.  Jen got off to a flying start winning the first 4 races. Pete Walters from Lincoln was sailing well and won 6 of the remaining races.  Geoff was sailing well and won a race before finishing early.  Everyone sailed on top suit except Mick Cooper from Lincoln who changed down to B suit after a few races; this paid off as the morning progressed.
Overall Jen won from Pete W and Mick, however Pete won the wine as Jen had already won a bottle in February.

A fine day with a northerly wind forecast. The event clashed with the Dragon TT at Lincoln, so fewer skippers were competing.
A enjoyable morning of close competitive racing with Brian winning overall and taking the bottle of wine.

Sixteen skippers from the four Clubs enjoyed a morning of close racing at Harthill in the first round of the Platinum Jubilee Trophy.  The weather was lovely, however the wind was an offshore easterly coming over the clubhouse which restricted the the beats on the course. All boats started on the A+ sails but as the morning progressed the gusts increased and they changed down to A suit.  The start line and first beat was one sided and there were many incidents on the start line and rounding some of the marks.  The sailing was competitive but good natured; boats that escaped at the start left the fleet tussling behind them. Craig Raistrick (ROFWAC) won the first 4 races, Phil Read (Askern) won three races and Jen Hand (Rotherham) won two; other races were won by Jerry Hannabuss, Cheryl Wood and  John Hollis al from ROFWAC.
Overall ROFWAC / Pennine won from Rotherham
Thanks to John Goodyear (Wilton Park) who initiated and organised the series, Jerry Hannabuss for the results program and race officer Geoff Farrar and his team at Rotherham for running the sailing.

Radio controlled model racing yachts from four Yorkshire clubs based at Askern (Doncaster), Rotherham, ROFWAC (Pennine) and Kirklees (Batley) are set to race during 2022 for a new prize named the Platinum Jubilee Trophy celebrating the 70th year of HM The Queens' outstanding reign.
This will take place at each of the clubs' home waters with each event lasting approximately four hours involving 12 races with between 20 and 30 yachts competing
Every one of the four clubs that we will have racing have wildly differing sailing waters, each presenting unique challenges in terms of wind strength and direction, the type of course that can be set together with general water conditions. It is very definitely a case of “home club advantage” but sailing at each club in turn will level this out giving everyone partaking an equal opportunity to rig their yachts well and race competitively. We are also hoping that this series of races will encourage more inter-club co-operation in the future, enable sailing skill levels to improve and, most importantly, encourage others to come along, see what radio controlled yacht racing is all about and have a go.
​
We would be delighted to welcome spectators, those interested in this hobby and the plain curious to every event in the series. A note of caution, however. Racing model yachts can be quite addictive as well as a pleasant and exciting way to spend time at the waterside in a competitive yet very friendly environment. Our members vary from 8 to 80 years of age and come from a wide cross section of society. It really is a hobby and sport for all.

The wind forecast was SSW 16+mph, but it was less than that the start of racing.  All the skippers agreed to sail on B suit.  There were a few skippers that couldn't sail, but those who sailed had an exciting and enjoyable morning's racing.   Before the first  race Martyn had some winch issues which took him a while to fix. Peter was the skipper in form; the racing was close with Jackie and Peter having several battles. Gerry had some good races and there were close battles through the fleet.
After coffee there were some mutterings about changing up, however midway through the race some of the strongest gusts of the day came through causing a few uncontrollable moments.  Jacky's jib downhaul failed and her boat had to be rescued and she had to retire for the day. Fortunately the expected showers failed to materialise.
Peter won the morning and the wine from Martyn and Gerry

An exciting morning's racing. The forecast was for 16+mph N wind, but is less than that when we started sailing. Most skippers opted for B suit but Jen and Martyn opted for top suit which paid off in the first race when they finished first and second. Stuart won the second race and after 3 races everyone was on B suit. In two races 2 boats came together and had to be rescued. Martyn, Jen Stuart and Geoff were all sailing well, winning races.
Overall Martyn won the day and wine, from Stuart and Geoff.

A lovely fine day with a southerly wind gave us an exciting morning of racing. The first two races on top suit before switching to B suit.  Pete Walters won the first race from Mick Chamberlain both from Lincoln; Pete then had two poor races but soon got his boat re-tuned. Jen Hand won the third and fourth races. Once Pete and Mick got their B suits on their Venties tuned, they were the skippers on form.
Overall Pete won on count back from Mick and took the bottle of wine, with Jen third.
After two events Jen is leading from Peter C followed by Pete W

Four hardy skippers decided to sail on the day after storm Eustace.  The forecast was for moderate southerly 12 to 25mph wind with some rain.  Harthill had avoided any snow and as often happens the wind was delayed.  We started racing in fine weather on top A+ suit but after the second race there was a slight slight increase in wind and we all changed down to A suit. Brian was sailing well and was the skipper to beat.  We had on race when the wind increased when we were sometimes overpowered, but it didn't last for long.  At the coffee break Brian was leading with Rob and Peter equal second which remained the situation until the last race when Rob was second.
Brian won the day and the bottle of wine followed by Rob.  A good morning's sailing with not much rain.

Yet another windy day, we had a trial sail on B suit and all agreed is time to change down to C for the strong southerly.
Brian's B sail ripped, but soon back on the water with his C suit.  Geoff won the first race followed by Jen, and they changed position of race 2.  Peter got some good starts and won the next 3 races up to coffee, to have a 1 point lead from Jen.  After coffee Jen and Geoff exchanging first places; Peter's shroud broke in race 8 and he missed the last race.  Martyn didn't have a C suit and struggled in the stronger gusts, but sailed well
Jen won overall from Geoff, and the bottle of wine

A windy day on B suit, with the rain holding off until we finished, we all had an enjoyable morning racing.
Simon Fairman and Martyn Aspinall were challenging for the lead, some of the rest of us were having tacking problems in some of the gusts.
Simon won the wine.

A very windy day with 2 races on B suit and the rest on C, with skippers struggling to stand up in some of the gusts .
The skippers that survived had an enjoyable morning's of close racing with Jen Hand and Peter Cogill challenging for the lead, Jen won the wine by 1 point.
Fortunately the very heavy gusts arrived after we had finished sailing 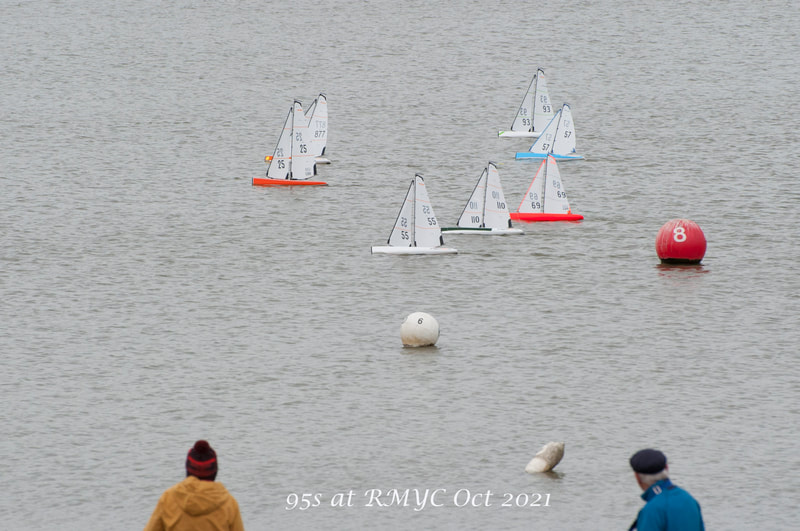